Representing The Communities We Serve, In Practice

Last year as Black Lives Matter protests rippled across the globe triggered by the murder of George Floyd, Public Practice saw a built environment industry response committing to tackling systematic racism and to increase the overall sector diversity. We, like many other organisations, signed a pledge with the intention of living our values and contributing to the necessary and urgent change needed within the built environment sector and wider society.

But over a year on, what has really changed? In 2020 the Estate Gazette’s survey revealed almost 67% of ethnic minority respondents felt that racism was an issue in the real estate sector and close to 68% had experienced racism. This year, those figures had risen to almost 84% and 75% respectively. Recently, Helen Fadipe of the BAME Planning Network, stated that ‘Black, Asian and Minority Ethnic planners working in local planning authorities do not have the same access to senior positions’. Although there has been an increase in awareness of issues around race and the built environment industry there is a lot more work that needs to take place beyond conversations and commitments.

Public Practice is working to establish a model for best practice through our own programme of placements, starting by focusing on the ethnicity data of the Associates we place in the public sector. In the past we have satisfied ourselves that the ethnic and gender diversity of our Associates outperforms the wider built environment sector: 64% of Public Practice Associates identify as female and 24% identify as having ‘Black Asian and Minority Ethnic’ heritage. However, that sets the bar quite low, as the industries we work within perform very poorly at representing the general population. If we want to set an example for others to follow, Public Practice should be aiming to represent the diversity of the communities we serve. 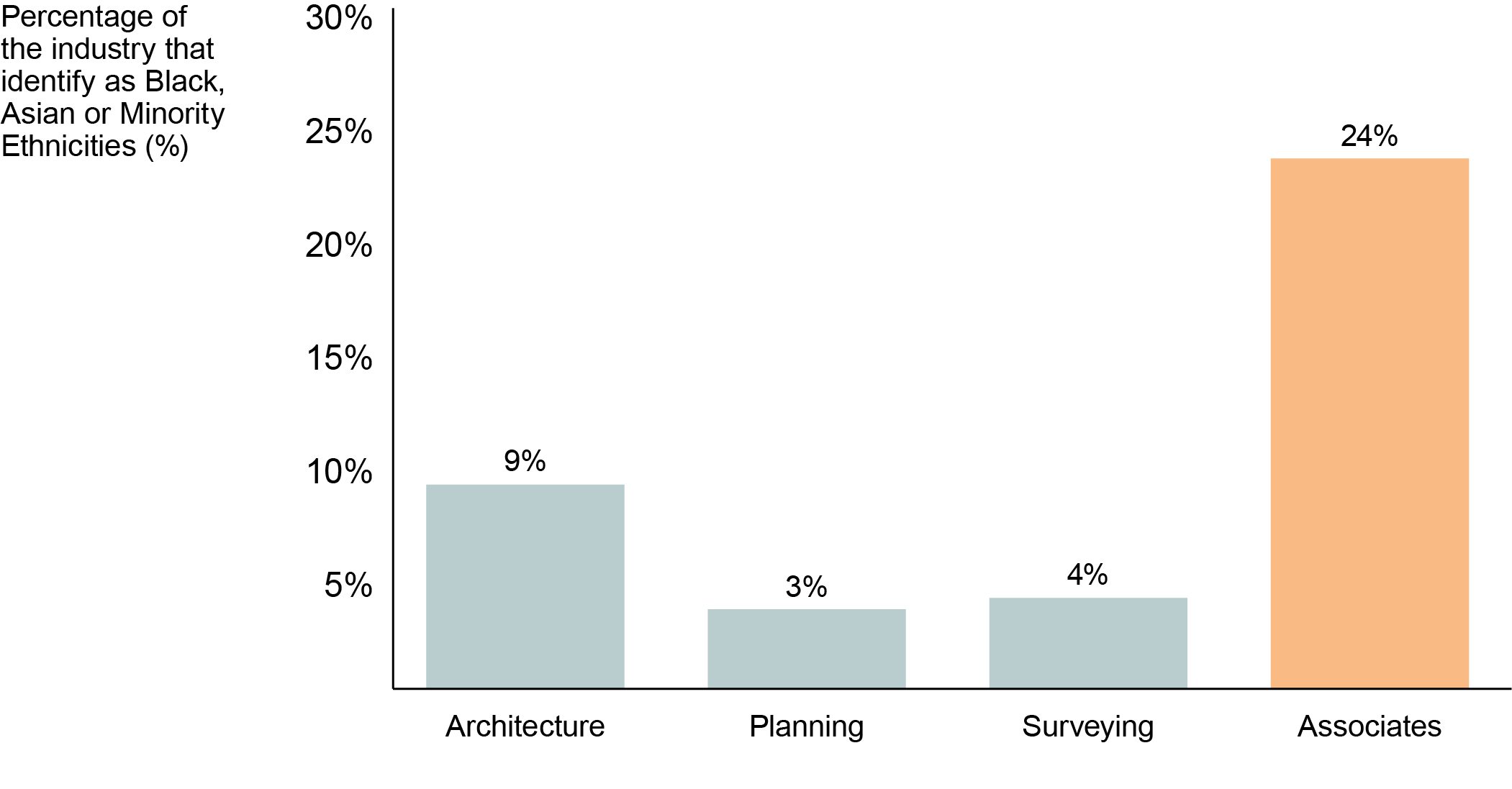 By taking an evidence led approach to recruitment, we have started to analyse the data in more detail and been able to start recognising trends in our own recruitment to our placement programme. For example, one pattern which particularly stood out was that Public Practice receives the least amount of applications from people who identify as Black and male to the programme. Through recognising this, we have decided to specifically target and encourage applications from Black, male candidates as we launch our call out for the next round of recruitment for Public Practice Associates. Moving forward, we are comparing our data to regional populations to measure representation among Associates. We see that we are failing to accurately represent the community in our cohorts in London, the South East, and East. Source: 2011 Census.

Having role models is important and as Black History Month comes to a close, we are going to use this opportunity to start commemorating and celebrating the achievements of Black public officers who are making a difference to people and places they serve. We also believe that one month was not quite enough to platform Black voices and expertise within the built environment sector, and have decided to have a six month campaign #BlackInThePublicSector to bring this expertise to the foreground. Along with this campaign, we will be continuing our outreach work and contributing to programmes such as the Land Collective to increase the diversity pipeline of talent entering the sector.

In the medium term, Public Practice will be analysing the placement programme recruitment data more strategically and will publish data annually moving forward. We will also look to include a breakdown of specific ethnic groups, moving away from the umbrella term of “BAME”, and continue to develop our non-bias recruitment process and undertake positive action in the selection process.

The ethnicity breakdown of the last three cohorts. Over time, we extended our list of ethnicities to more accurately represent the diversity of the cohort. Source: Public Practice.

We might not always get it right, but that is not an excuse. We must encourage ourselves and our partners to not only pledge and discuss, but to put into action the change we need in practice to ensure that we are doing everything we can to represent the communities we serve.

Black in the Public Sector with Anthony Okereke

Black in the Public Sector with Kazadi Mwamba

Black in the Public Sector with Richard Yeboah

Back to: Resources, People